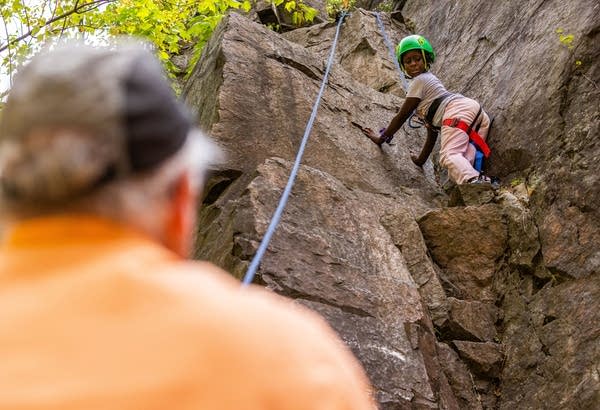 On a recent gorgeous late summer day, 9-year old Ryleigh Robinson scampered like a spider up a 30-foot tall rock face on Ely’s Peak in western Duluth. Dave Pagel with the Duluth Climbers Coalition shouted encouragement from below.

“Ryleigh, you’ll find a good foothold for your other foot right up in that corner,” Pagel calls up, as he belays her from the ground, using a rope to keep her from falling.

Ryleigh arrives at a tough part in the climb, and pauses. “I want to come down,” she calls.

“Are you sure?” Pagel asks.

She doesn’t respond, and instead makes a sudden move, reaching high with one hand and pushing up with one of her feet, ascending higher up the cliff.

“Yes, Ryleigh, yes! You did it!” Pagel yells, as she reaches the top of the climb.

Ryleigh was there with the Boys and Girls Clubs of the Northland, which partnered with the Climbers Coalition to take about a dozen kids rock climbing. Robinson had climbed indoors before, but this was her first experience climbing on real rock.

“It’s hard, it’s kind of scary, I thought I was going to drop,” she said, once her feet were planted firmly back on the ground. But then, she was ready for more.

“I want to do this one,” she shouted, pointing at another route up the rock wall.

That afternoon of climbing was one small effort to try to address a larger problem, what’s often referred to as the “adventure gap.” As adventure sports like climbing and mountain biking surge in popularity, they remain overwhelmingly white.

According to the Outdoor Industry Association, about 75 percent of Americans who take part in outdoor sports are white. Yet they make up only about 60 percent of the overall population.

For Pagel, that gap is especially concerning in Duluth, which has spent hundreds of thousands of dollars in recent years, building mountain bike and cross country ski trails. The city has also invested in a new ice climbing park, and places to kayak and canoe in the St. Louis River.

In Duluth, many of those outdoor amenities are being built in the western side of the city, which is much more racially diverse than Duluth as a whole, and has larger disparities in income, health and education.

But there are several barriers to getting more young people participating in those outdoor activities. One is cost — many adventure sports require expensive equipment.

“It’s really become a pay-to-play landscape in all recreation, so we’re trying to defeat that,” said Russ Salgy, executive director of the Valley Youth Center, an organization serving kids in western Duluth that has also partnered with the Duluth Climbers Coalition.

Salgy teams up with groups like the climbers coalition, local governments and schools, and private businesses to expose kids to activities they might not otherwise have the opportunity to experience.

“We had kids that first Wednesday night falling into fences,” Salgy said. But by February, they invited parents out to the ski hill “just to showcase how these kids can now handle ski hills on their own.”

The city of Duluth is also partnering with groups like Valley Youth Center and the Boys and Girls Clubs to offer recreational programming. The Duluth parks department also runs its own programs, including ice skating and archery, for which it provides free equipment.

Parks director Jessica Peterson said the city is trying to “crack the nut on mountain biking.” More than $2 million in public funding has been spent to build the Duluth Traverse, a 100-mile long mountain bike trail that spans the length of the city’s ridgeline.

But mountain bikes are expensive, which can deter people who otherwise might be interested in tackling the trails. Peterson said the city is trying to secure funding to buy a mobile mountain bike fleet that the parks department would bring to youth throughout the city, to teach mountain bike skills and trail etiquette.

“We’ll continue efforts like that to … identify what the recreational assets are in Duluth, who is using them, and who would like to use them, but has some sort of barrier in place that we might be able to help remove or reduce, so that they can enjoy it more,” Peterson said.

Research on outdoor recreation participants also suggests that to really close those gaps, the leaders of those activities need to come from the communities of people they’re trying to reach, Peterson said.

“The big challenge for us right now,” she said, “is how do we grow our instructor base, so that it is more diverse than it is now.”

Professional mountain bike racer Alexandera Houchin has experienced the lack of representation firsthand. A member of the Fond du Lac Band of Lake Superior Chippewa, who lives on the band’s reservation about a half hour south of Duluth, she started racing about a decade ago. “That’s where I really started to notice. I barely ever see any brown people biking,” Houchin said. “I rarely ever see any non-white people at these races.”

That made her feel lonely, and sad, she said, because cycling has meant so much to her. It’s changed her life, she said, by helping her lead a healthier lifestyle and connect with her cultural identity.

As young people begin to see more people who look like them participating in these sports, Houchin said, then those sports will start to seem more attainable to them.

Houchin conducted a survey on the Fond du Lac reservation to gauge interest in starting a bike collective. What she heard back was that people need access to a lot more than just the equipment — whether it be a bike, or skis or climbing equipment. Many people have no idea how to get started.

Advocates of increasing access to outdoor recreation say it builds skills that can apply to everyday life, like perseverance, and overcoming fears. It showcases what they can accomplish.

Russ Salgy said he’s had to work with kids who felt a sense of “crisis panic” the first time they were ever out in the woods after dark at a Duluth park. He said it can also take a long time to get young people comfortable kayaking and swimming.

“It can take them a while to even get a toe in the water,” he said. “Because they’ve been taught this is a very dangerous thing.”

But by exposing kids to these activities, the hope is that it might ignite a spark, that these could become lifelong activities.

That’s why opportunities like with the Duluth Climber’s Coalition are important. They give kids like Gabby Manthey a chance to do something they never thought possible.

After completing a difficult climb, the 13-year-old was amazed at what she just accomplished.

“I can’t believe that I was actually that high up! I feel shocked … because I just climbed super high, and I thought that I couldn’t do it, but I did it.”

That’s the goal of programs like these. To grow future climbers, and future mentors, who will then inspire their peers to enjoy the outdoors in their backyard.

You make MPR News possible. Individual donations are behind the clarity in coverage from our reporters across the state, stories that connect us, and conversations that provide perspectives. Help ensure MPR remains a resource that brings Minnesotans together.

Donate today. A gift of $17 makes a difference. 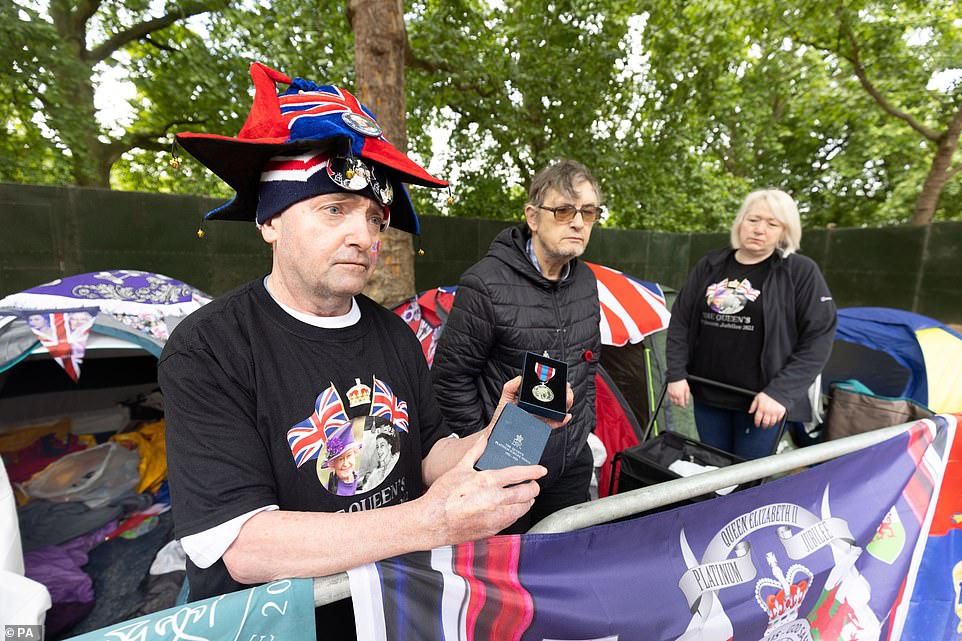 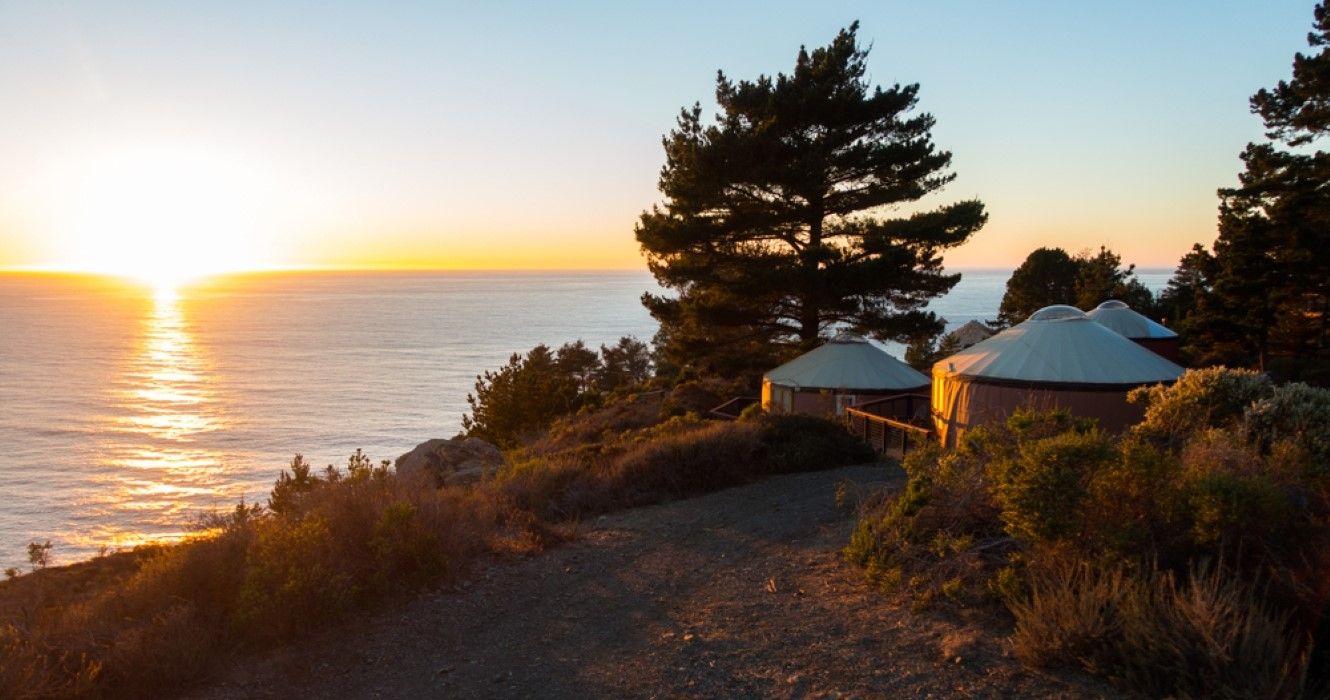